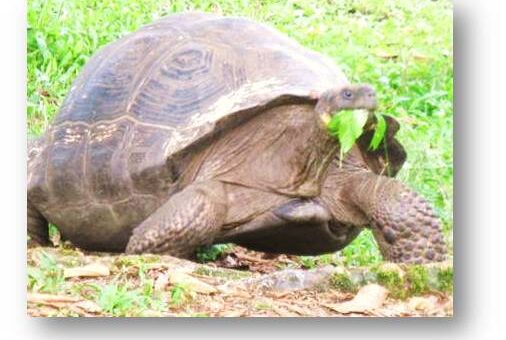 OLDEST LIVING ANIMAL PROVES THAT NO MATTER WHAT YOU’VE BEEN TOLD, THERE IS NOTHING WRONG WITH YOU

The first thing I noticed on New Year’s Day was how fast the 500 pound tortoise was moving at me.  On the island of Santa Cruz in The Galapagos, these giants live in the lush highlands and don’t really care what’s going on around them.  Clearly I was the one expected to move out of the way.

We heard a low grumble and our guide excitedly led us beneath a barbed wire fence to watch a pair of hundred year old tortoises having sex.  “He runs after her until she gets tired,” our guide said, her eyes lit with glee.  “They will go on like this for five hours.”

We moved on to a favorite pond where tortoises liked to sleep at night.  Unlike during the day, when they need to find shade to keep from cooking in their shells, at night, they need the water to keep them warm so they can move in the morning.

Before wading into the water, a tortoise stopped and stood up straight, extending its head and legs as finches fluttered about it.  The birds quickly land and peck at the underbelly, eating parasites and scratching off other stuff.  The tortoise stands still during this time, looking equal parts grateful and impatient.

“Watch out for the poison apple bush,” our guide said, pointing to a nearby shrub.  “It burns the skin.  The tortoise eats it and for them is a laxative.”  Though her English was near perfect with barely a hint of Spanish accent, to make sure we understood her, she added, “They eat it to shit.”

Let’s say that tortoise was a nice lady named Sally who went for an annual physical.  Here’s what the doctor would be likely to say:  “You know, Sally, that big heavy shell you carry around isn’t good for you. You’re taking too many laxatives and you’re covered in parasites.  What’re you going to do when there aren’t any finches around to clean you up?  This isn’t good for you.  We got to get you fixed-up, Sally.

If you think carefully, something like this probably happened to you just today.  Your boss may have told you to speak more clearly in meetings, the TV might have told you your bones will break if you don’t walk up 50 stairs a day.  This sort of thing is always going on.

Do we accept this suggestion that something’s wrong with us and try some self improvement?  You likely have and you might notice that when our efforts don’t meet the standard (they never can) then we have guilt and self recrimination.   So now we’re in even worse shape!   And it’s our own fault for accepting the suggestion that there was anything wrong in the first place.

Tortoises can’t swim well, but they can float.  Their shell is buoyant and shark-proof.  They can go a year without food or water, which is long enough for an ocean current to carry them to some other land.  That’s how they arrived in The Galapagos, and that’s how they have survived for billions of years to become the longest lived land animal.

The tortoises have lived so long because they don’t have the advice of others to kill them.   What’s really going on is that the tortuous has a plan:  keep the shell, despite the dependencies.  You see, these volcanic islands only last a few million years.  The ocean smashes them up and sweeps them away.  And that’s where the tortoise has its sights aimed.

Darwin might not have noticed this during his visit through the Galapagos, but I did.  Here’s the part of evolution that really matters:  Any suggestion from anyone, including your own self criticisms, that says there’s something wrong with you need not be accepted as having any credibility.  Aside from some acute condition, like you fell and now have a bone sticking out of your leg, there’s probably nothing wrong right this moment.  That’s all.

This is how humans can stick around long enough to be running into giant tortoises in outer space millions of years from now.