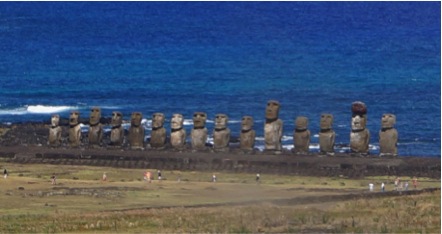 Wanted: Answer to a Cosmic Mystery on Easter Island.

The most remote place on the planet is an island in the South Pacific known as Easter Island.  Over two thousand miles south of the equator, and two thousand miles west of Chile, you might know it as the place with the giant head statues everywhere.

Named Rapa Nui by the Polynesians who first settled there over a thousand years ago, there are more mysteries on the small few square miles of Easter Island than any other island on Earth.  Foremost concerns the giant stylized statues known as moai.  Why were they built and how did they move these megaliths?  Legends say the moai literally walked to their platforms.  Others say aliens built them.  During one trek across the island I was with three other tourists and a native Rapa Nui man named Roberto, who was our guide that afternoon.  The previous day I had peppered Roberto with endless questions during our hike up a volcano, which he answered rather vaguely, as most Rapa Nui are inclined to.  Their general attitude is a friendly smile that seems to say, “Look around and see the answers for yourself.

On this day we were visiting a site known at “The Fifteen.”  A giant ahu (platform) where fifteen moai stand with their back to the ocean.  As the others walked away from us to take some photos, I was asking, “Why are there fifteen?  What’s the significance of that number? Did they move them here all the same way…”

THE MYSTERY OF HOW THE STATUES OF EASTER ISLAND REALLY WALKED

Finally, Roberto took a look at our tour-mates walking out of earshot and put his finger to his mouth. “Shhh.  Don’t tell the others.”  He quietly had me follow him to a patch of bare ground on a slight incline.  With a final glace at the horizon to make sure the others weren’t looking, he said, “Put your hands on your stomach like the statutes,” he instructed me.  “Then move your body like this, but don’t move your legs, just keep them still.”  He proceeded to hum and then sing a song in Rapa Nui and showed me how to sway my torso back and forth without moving my legs.  Within seconds, my body had glided forward almost a foot, the momentum of the dance was carrying me along while my feet and legs were perfectly still.

“This is how you moved the moai!” I exclaimed.  Roberto glanced at the others, still several hundred feet away and shushed me.  This was secret, and sacred.

“But it’s part of your culture, a dance a thousand years old,” I persisted. “Why do you allow all these archeologists to come here and try-out different theories on how the moai might have been moved, using logs and tripods and stones when you know the answer?  They really did walk to their ahu!”

“Good marketing,” he answered.  “Good for tourism.”  This was his livelihood and so I understood and kept quiet as the rest of our group rejoined us.

BUT WHERE IS THE PYRAMID OF EASTER ISLAND?

However, this was not the mystery I was on Easter Island to solve.  I was there looking for a triangle, or something shaped like a pyramid.

This mystery originated while exploring the occurrence of antipodes.  An antipode is the spot on a globe directly opposite another spot, like the North Pole is to the South Pole.  Among the ancient monuments on Earth, for every Stone Henge, there is another significant construction located at its antipode.

The pyramids at Giza presented me with a conundrum.  The great pyramids have nothing at their antipode except for ocean.  After a little math and calculation for tectonic movement, it became apparent that five thousand years ago, Easter Island was the antipode to the pyramids in Egypt.

I was incorporating this information into “Alex Detail’s Rebellion” as well as “Disappearing Spell,” but the monolithic moai didn’t seem like the obvious constructions to mirror the pyramids.  Without anything else to go on, I made up something called the “Neverstruck Triangles.”  I imagined two giant stone triangles that could be leaned against one another to create the outline of a pyramid.  Since pyramids serve as focal points for energy, the Neverstruck Triangles would be capable of energy defraction the way a prism defracts light into a rainbow.

In three days I had covered most of Easter Island and hadn’t found any answers to my pyramid mystery.  But I was making progress getting answers from Roberto, and after he took me into his confidence to show me how the moai were moved, I explained to him what I was looking for.  He thought about it for a moment, then shook his head.  He didn’t know the answer, but he told me he would talk to a man named, “Tavi.”

I didn’t hear any more about Tavi until the following day.  I was visiting the quarry where the giant statues were carved.  That day we had a new guide, Mateo, a young man who was a descendent of one of the Rapa Nui royal families.  Mateo had spent the day showing us the exterior of the quarry volcano, where hundreds of moai lay buried and half-carved in the volcanic tuff.  We were nearing the end of the tour and our small group started toward the small lake in the center of the quarry for a rest in the shade.

But Mateo took me aside and said he had something special to show me.  “What is it, Mateo?”

“Call me by my Rapa Nui name, Tavi.  I talked to Roberto and I have an idea of something.”

Speechless, I followed Tavi as he guided me along a dusty trail that wound around the back of the crater.  I suddenly felt like I was in another world altogether.  This barren land looked like the desert plains east of Westeros from Game of Thrones. Walking the dusty path reminding me of Daenerys Targaryen’s trek from the Dothraki lands to mysterious desert cities of Quarth and Astapor, places that stood eons, while full of alien monuments and ancient histories, baking under the relentless sunlight.

As we hiked up the path we came upon a fallen moai, which at first was difficult to distinguish from the crumbling boulders surrounding us. “You see?” Tavi said, pointing to a curious feature carved onto the moai’s neck.

“We call it the tattoo,” he explained.  “This tattoo is a rainbow.  It is the only one that exists.  The waves represent light and energies separated into their separate worldly forms.  This moai was to have the power to harness these energies and was to sit at the center of a great prism, but it never made it to its ahu.  So after it fell, this tattoo was carved onto it, so that we remember its purpose.”

He glanced around the island, bare of trees with its history of great societies, the highest feats of engineering and art, war and decent in chaos and finally transcendence and enlightenment.  It was as if this fallen moai would have changed the course of their history.  For better or worse, life had unfolded as it had on this corner of the world.

And I had found the Neverstruck Triangles.